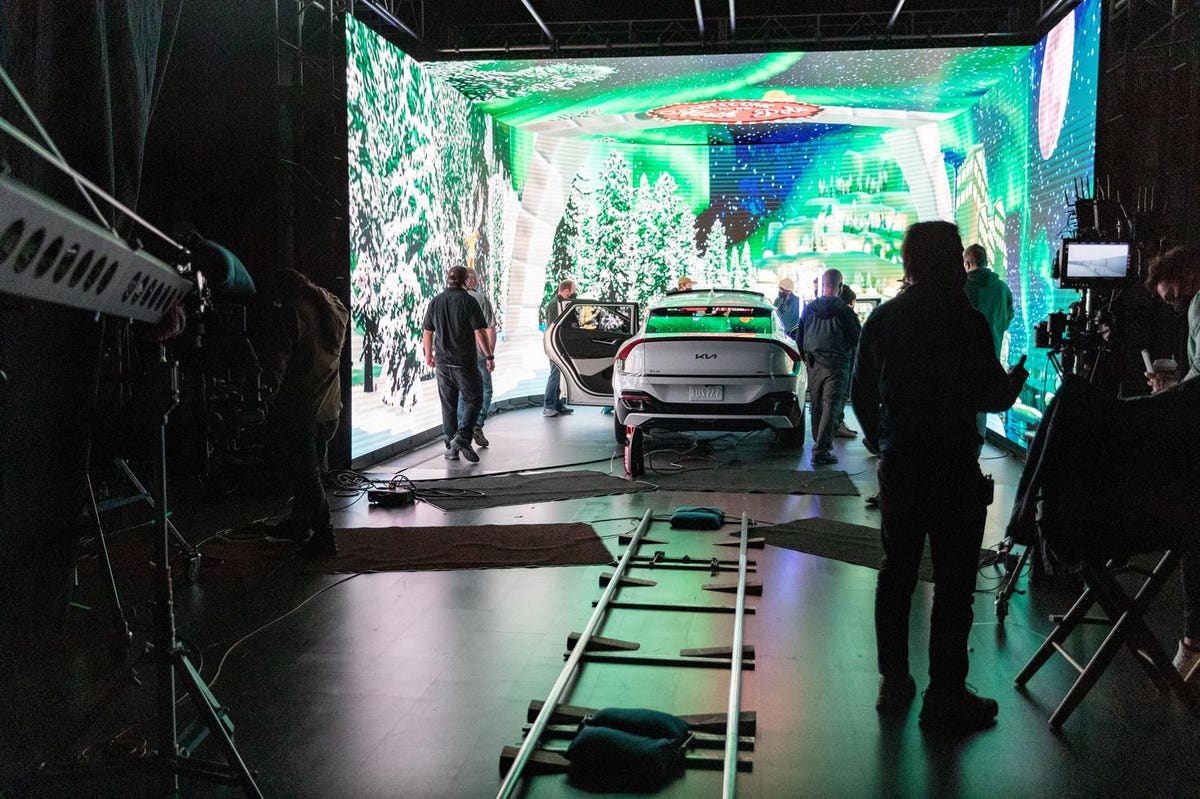 When Kia America surveyed its customers in 2021 about their favorite charities, St. Jude Children’s Research Hospital “was one that rose to the top,” said Russell Wager, vice president of marketing for the carmaker. That’s one reason Kia has amplified its relationship with the Memphis-based institution that has blossomed into one of the world’s leading medical institutions over the last 60 years.

This holiday season, Kia has been peppering the airwaves and digital media with commercials titled “Holiday Joyride,” which depict the fantastical virtual journey to the North Pole that Kia created for actual St. Jude’s patients and their parents who couldn’t leave the Memphis campus.

The ad opens with St. Jude patient Adalyn sitting safely in the back seat of a Kia EV6, which “travels” through a tunnel of red and green start-shaped arches created by 296 curved LED screens that Kia constructed on a custom 50-by-100-foot set at the hospital. The car is mounted on a system of hydraulic compressors.

The LED screens slowly transition to depict a star-filled night sky as a personalized welcome message appears featuring the patient’s name. As the EV6 is gently lifted and lowered to simulate the experience of driving, the virtual landscape reveals a forest filled with snow-covered pine trees, a galloping reindeer that leaps over the car, and even a narwhal moving across the sky on the way to the “North Pole.” Adalyn and other kids — and even a parent — in the ad revel at the imagery and the experience.

“It’s one thing to make a financial donation” to St. Jude’s, Wager told me, “but we also wanted to do something for the kids who are at St. Jude’s now. Some of them can’t leave the hospital during the holiday season.”

St. Jude was famously founded by the late entertainer Danny Thomas and opened in 1962 as his signature way of giving back. The original hospital now has eight affiliate clinics across the country as well and focuses on finding cures and saving children with childhood cancer and other life-threatening diseases.

Kia recently accelerated its relationship with St. Jude beginning after the sale in May of its 10-millionth vehicle in the U.S. market, to Monti Charoenphong at a Moreno Valley, California, Kia dealership. As part of the occasion, Wager recalled, Kia donated $10,000 to Charoenphong’s favorite non-profits, which included St. Jude’s. The results of Kia’s consumer survey about charities also stuck in executives’ minds.

Then in October, Kia included a $100,000 donation to St. Jude’s as part of $600,000 in charitable contributions that it announced along with the groundbreaking for its new EV complex in Savannah, Georgia. In November, Kia announced the brand wil donate a minimum of $1 million to St. Jude’s.

“We thought, why not focus on [St. Jude’s] and let our customers now be part of that” through the “Holiday Joyride” campaign, Wager said. “The kids at St. Jude’s are ones that have a strong fighting chance — if they get the right care — of seeing adult life. Plus, it is part of our overall [brand] theme of helping people to achieve their goals and dreams.”

Kia’s “Accelerate the Good” charitable initiative has donated more than $14 million to various causes since 2019. And among other marketing initiatives in the same general vein, Kia ran a Super Bowl ad in 2020 that featured its efforts to help troubled youth and included the story of Las Vegas Raiders running back Josh Jacobs.

Are You Ready For Collaboration By Design?

Are You Ready For Collaboration By Design?