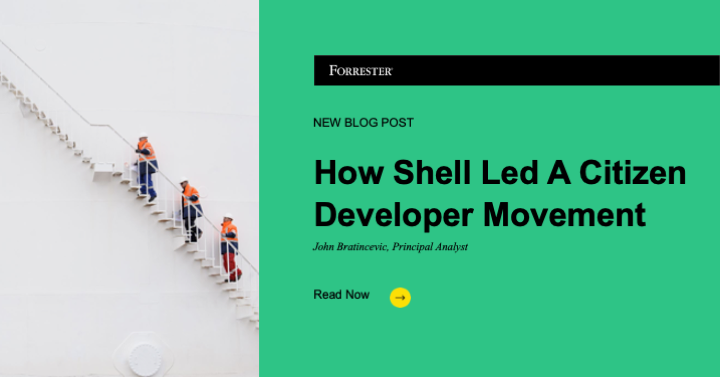 In 2021, Forrester identified three common structures for citizen development using low-code platforms: privateer, democracy, and federation. And over the course of this year, we’ve published a trilogy of case studies illustrating each of the three patterns. The first told the story of a process improvement team that systematically digitized their firm’s value streams and inspired a hyper-agile continuous improvement culture. The second showed the importance of treating citizen development as a product with its own long-term adoption lifecycle — and the critical role of mentorship.

The third case study, published today, is the most significant of the trilogy: It documents how one of the world’s great companies has thus far scaled its citizen developer strategy to over 4,000 employees all over the world. Shell’s “DIY” program is a cornerstone of the firm’s digital transformation, and there are clear lessons to learn from its example:

Researching and documenting these case studies has been the most enjoyable work I’ve done as a Forrester analyst. I encourage our clients to read all three of them — the Shell story in particular. I believe that it provides a clear window — and the beginnings of a clear path — into the realistic future of enterprise technology.