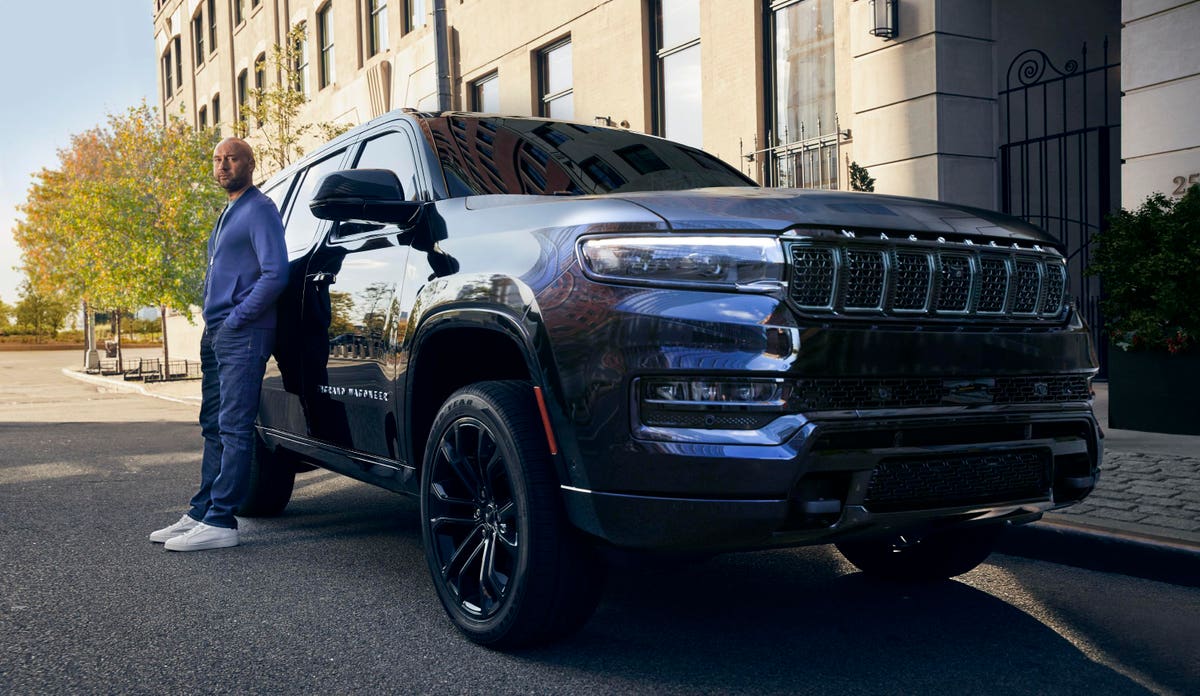 The new Jeep advertising campaign for its Grand Wagoneer super-luxury SUV, which debuts tonight, has the feel of one of the epic efforts of the past decade or so launched by a company that revived itself from bankruptcy with stellar branding and image-making before worthy products finally could substantiate what Jeep, Ram, and Dodge have become in American consumers’ minds.

“Eyes Wide Open” is the campaign that Stellantis, new owner of the brand that was revived by Fiat Chrysler, is launching during the TV telecast of the first game of the 2022 World Series. Not accidentally, to promote its first vehicle that punctures the $100,000 price point in a standard way, Stellantis has enrolled one of the gold standard of baseball players, ex-Yankee superstar Derek Jeter, and his wife, Hannah Jeter.

“We needed a personality that symbolizes American success and aspiration, for one,” Olivier Francois, global chief marketing officer for Stellantis, told journalists. “Two, we wanted someone relatable to our customer, which is always key — someone they’d know and would be relevant to them, possibly someone with a family, wife and kids, the kind of person who could authentically embody our new three-row SUV.

“And most important is that it’s a Jeep, which is authentic, and we’re obsessed with that [criterion],” Francois continued. “So we wanted someone who isn’t necessarily a rock star or a Hollywood star, not necessarily someone who’s over-commercialized or a professional endorser. And that’s more complicated than you might think. It took weeks if not months before we came up with the perfect choice.”

The timing of the campaign is no accident, either, though it isn’t what Stellantis first had envisioned. Grand Wagoneer was eagerly awaited by upper-crust families and has sold well but, since its production launch last year, the revived nameplate has been supply-constrained like so many other vehicles. Stellantis marketed it only sparsely because of that.

And while Jeter’s New York Yankees didn’t make the Series this year despite high expectations and the second-most regular-season wins in the American League, now Jeep gets to stage a grand re-launch of the Grand Wagoneer on one of the best live-TV platforms available.

The Grand Wagoneer campaign will run across North America in television, social media and digital-media channels and include future print extensions. In addition to the 60-second launch spot, the campaign will feature 3o-second and 15-second video content featuring the Jeters, running across multiple media platforms.

Not unintentionally, however, the primary vehicle for the new ads will be television, a medium that Francois has exploited to stunning effect with special ads for Stellantis’s U.S. brands beginning with the “Born of Fire” two-minute advertisement for the Chrysler brand, featuring Eminem, during the Super Bowl in 2011.

“We tend to be more and more smart, focused and selective” with advertising media, Francois said, “but this, as I see it, is really an ‘old-medium’ campaign” for television. “We may adapt creative tailored for social media, but it is, directionally, old-medium.”

Indeed, the style and mien of the Grand Wagoneer spots featuring the Jeters is very reminiscent of the kind of big-moment TV campaigns Fiat-Chrysler did regularly for years under Francois but hasn’t fielded in some time since Stellantis acquired it.

Matching the price and importance of the vehicle itself and what Grand Wagoneer is supposed to say about how the Jeep brand has “arrived” at such a level of opulence and a rarefied price point, the “Eyes Wide Open” campaign has the feel of grandness itself. The cinematography, the red-carpet scenes, the regular-family scenes, the good-guy persona of Jeter himself, the glamor quotient of fashion-model Hannah Jeter, and glimpses of the grandeur of the vehicle that surely will be revelations to millions of American consumers — all of this became a formula where the effort meets the moment.

The campaign seems a perfect allegory for the striving of the Jeep brand itself, from its highly utilitarian and rugged past to a formidable marque that now stretches across much of the U.S. automotive market and a brand that now can envelope every segment from $25,000 to $120,000.

Jeter is a product of Kalamazoo, Michigan, whose boyhood dream was to become shortstop for the New York Yankees. But only through striving and authenticity and a distinctly American story — the kind that is associated with the Jeep brand — did Jeter achieve the status of sports legend, 14 All-Star teams, the Baseball Hall of Fame, and subject of the recent seven-part ESPN documentary, The Captain.

Thus even the voiceover of the main anthem ad, which launches Friday night, evokes some of the best tent poles from the Francois portfolio over the last 11 years, which includes now-classic utilizations of Bob Dylan, Clint Eastwood, Bill Murray, a posthumous Paul Harvey and others, as well as the groundbreaking participation of Eminem which literally helped revitalize Fiat Chrysler a decade ago. (There’s even a self-referential bit about Detroit in the script, which has had almost nothing to do with Jeter — but everything to do with Fiat-Chrysler.)

The best thing about this ad might be that we can expect to see it on TV multiple times during the next couple of weeks of the World Series. Fiat-Chrysler’s iconic Super Bowl ads had their shining moments only once.

How to Create a Social Media Report [Free Template]