Pharrell Launches The Mighty Dream Forum, With Lewis Hamilton, Maverick Carter And Global Brands Coming Together In Norfolk For ‘The Davos For DEI’ 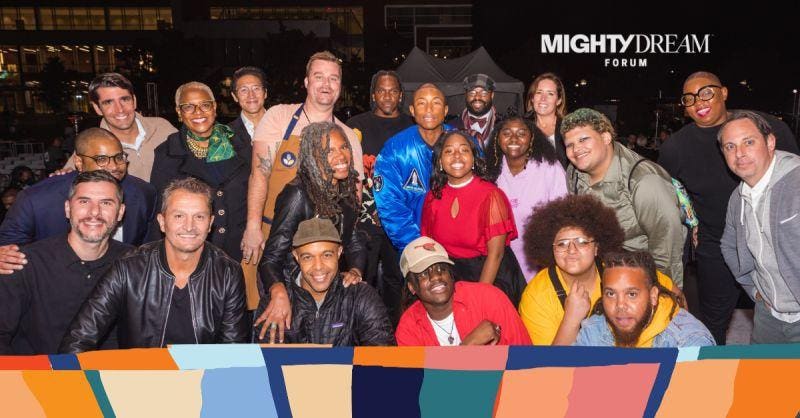 I caught up with Robby Wells, Executive Producer of the Mighty Dream Forum, to find out more about the purpose and intention behind this ground-breaking event, and how it got started.

“It was the convergence of two ideas. First, after hosting a much smaller, but similar event last fall in Norfolk, it became clear that we could have critical conversations about equity and inclusion and do so in an environment that was very engaging and left people feeling excited and inspired to go further. It was casual in a way that was refreshing to the panelists who had come from Softbank, KKR, Blackrock ARES and similar companies. We had incredible food and a DJ next to the stage. The environment and nature of the conversation meant guards were down. We went into that event not anticipating doing something like it again, but before we had wrapped, it was clear that we needed to,” said Wells.

He continued, “Second, Pharrell spends a lot of time meeting with corporations, big brands and financial institutions and these days, many of these brands now consider DEI a core brand value. So it’s inevitable that it comes up in conversation. Recognizing that there is a lot of progress being made within these organizations, it became clear that they could learn from each other – their wins and losses. If everyone is working towards progress, shouldn’t we convene annually to accelerate progress? Pharrell wants to host this global conversation and host it in Norfolk and do so in a way that makes it stand out among other financial / business events. Location is key.”

Pharrell has been impressed and more importantly, inspired, by how business leaders have accepted his invitation to convene at the Mighty Dream Forum in his home state of Virginia. He said, “I am blown away by the willingness of so many business leaders to jump into this conversation. That in itself is progress. They know that this is not only an important conversation, but just good business. If we can come together and demonstrate that doing the right thing for people is also the right thing for business, and we start to outline a playbook of what works and what doesn’t, then we’ll be successful. I have a festival filled with rockstars called ‘Something In The Water.’ For Mighty Dream, the business leaders get to be the rockstars”.

We talked about how DEI was also in a place where conversations need to have a sense of vulnerability. I asked Wells about whether it was their intention to create a space where leaders could have those transparent, candid moments. “I think there is something about Pharrell that makes him especially potent in these situations. He quite naturally makes people feel really comfortable. It’s probably a music producer trait that translates really well to other environments where vulnerability can bring out the best in a person. He also has an ability to galvanize people and their goodwill. Mighty Dream is a playground for someone like him. He’ll be a part of most of the conversations and his very presence will lead to more open, meaningful dialogue,” shared Wells.

The forum will feature leaders from the world of finance, consumer brands, academia and beyond. Confirmed participants include leaders from Andreessen Horowitz, ARES Management, Bicycle Capital, Brinc, BlackRock, BNY Mellon, ICONIQ Capital, Goldman Sachs, Lightspeed Venture Partners and more to be announced from the world of global finance. Others such as Allbirds, Boeing, Chegg, Cisco, Gilead Foundation, The Guardian US (media), Google, H&M Group, LVMH, McDonald’s, NASA, NBA, Sentara Healthcare, Tech Equity Collective, a Google Initiative, Universal Music Group, Unreasonable Group, Walton Family Foundation, and Yelp! are all contributing leaders and their perspectives to the forum. Leaders from Mighty Dream, Edelman, Ernst & Young, The Martin Agency, McKinsey, Publicis Groupe, Publicis Health and others from the world of consulting, media, and communications will share their experiences as well.

The experience itself is designed to be very different to traditional business conferences. “Change and efforts to facilitate change can take many shapes, but we have to stay true to ourselves. We would fail miserably if we set out to create a traditional financial conference and we’d never try. Pharrell is not attempting to author – but instead gather and host. And as the host, we get the opportunity to create what is missing. Mighty Dream is naturally going to blend financial, social and cultural capital because it feels like the modern approach,” said Wells.

Each day concludes with networking, drinks and dinner for forum attendees—a chance to rub shoulders with business titans and like-minded change agents worldwide. “Attendees are all essentially self-identifying as advocates for change and progress simply by being there. So we must work hard to ensure the content feels actionable. But beyond the content itself, it’s about feeling part of something bigger – a community of like-minded professionals using their positions within the workforce and society to accelerate change. Words like “community” and “change” are so ubiquitous these days, but I think our approach to programming and all the adjacent experiences attendees will have will forge lifelong bonds among people who might not have crossed paths otherwise, whether seated at the same dinner table and standing side by side at the Thundercat show. We will ground each day in the harsh realities of inequity, then shift into solution-centered conversations, but end up full of blissful joy at a concert each night,” shared Wells.

Another hallmark will be the focus on the global DEI movement. Wells commented, “It is so easy to process both outages and successes in progress through a local lens. Most of us do look at DE&I through from a US-based perspective, but it is now undoubtedly a global conversation. There are 44 countries in Europe alone. Each with different employment laws and cultural norms to navigate. I can only hope that people in our audience will aspire to take their wisdom global at some point, so we’ve brought a few experts in to share their journeys. For instance, I applaud Annie Wu from H&M for the work she has leading there. She led the company out of a tough predicament a few years ago and they seem to be better for it. I am excited to hear from her. After her presentation, she will sit with other leaders in the global DEI space for a chat.”

Finally Wells shared their ambition as to how this event will impact Norfolk itself. “Norfolk is a gem waiting to be discovered. The locals know it. Pharrell knows it. For me, the analogy and goal is simple: Mighty Dream is to Norfolk as SXSW is to Austin. Like SXSW where only a few of the topics are Austin-centric, only a few of the conversations at Mighty Dream are about Norfolk. However, we’d love to see Norfolk follow a similar economic and relevance growth trajectory, yet stay true to itself. I think Norfolk is ready for something like Mighty Dream.”