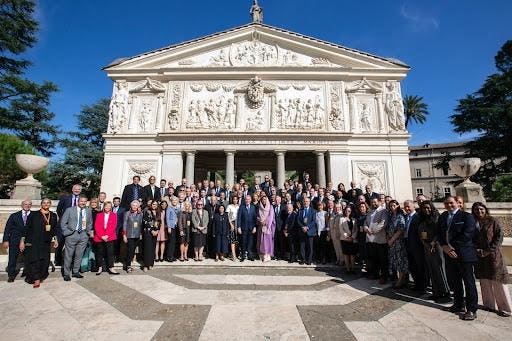 The Galileo Foundation launched its inaugural ‘Faith and Philanthropy’ Summit hosted at the Vatican during October 14th – 15th, which brought together 145 leading philanthropists from five different faiths who pledged to join forces across faith lines in order to solve some of the world’s most pressing challenges.

The ‘Faith and Philanthropy’ Summit set inside the most sacred places in Christendom, the Vatican City, is a testimony to the history of some two millennia, and marked a historic moment for philanthropy. The Summit, created by John McCaffrey of the Galileo Foundation, alongside Jewish and Muslim ‘faith partners’ and the Vatican’s ‘Compact on Global Education, is redefining how impact philanthropy can collaborate in new ways. It was the first time that leading philanthropists, such as Jeff Bezos and Laura Turner Seydel, were brought together with key religious individuals such as Cardinal Pietro Parolin, the Pope’s Secretary of State, and by Cardinal Peter Turkson, chancellor of the Pontifical Academy of Sciences.

The Galileo Foundation, founded by John McCaffrey, seeks to assist and support the work and mission of the Pope and that of the Pontifical Academies and other projects of the Holy See. McCaffrey had the idea five years ago to create the ‘Faith and Philanthropy’ Summit in order to bring together the most influential philanthropists from across the globe to break out of their silos and work together across all faiths to help solve the world’s most pressing issues. The Galileo Foundation’s first ‘Prophets for Philanthropy Award’ was presented at the Summit to honor the proud tradition of faith and reason which remain cherished ideals of the Pontifical Academies. John McCaffrey shared more about the Foundation, and how it aims to bring together an interfaith coalition to help do more good in the world.

His background and growing up in Northern Ireland formed his worldview of how competing faiths could find common ground. “I grew up in the worst years of The Troubles in Northern Ireland where there was so much suspicion of other faiths. My town was a mixed community so I had exposure to people of other faiths, in fact my next door neighbours were Protestants and wonderful people. However, it wasn’t until I went to Cambridge that I met Jews and Muslims for the first time. Today, Northern Ireland has shown that the only way to foster peace and mutual respect is by listening, by trying to understand the position of the other. Pope Francis also said this recently on his visit to Kazahstan. Building faith collaborations, that’s the key. That’s why I wanted to create the Summit,” McCaffrey explained.

The commitment is backed by a new interfaith humanitarian fund, the Human Family Fund, which was launched at the Summit by the Galileo Foundation and UBS. The Fund is dedicated to supporting faith-inspired NGOs working in the areas of human trafficking and modern slavery, education, global heath and climate, building capacity and supporting new projects which work across faith lines. UBS committed to become the matching partner in the Fund, lead by the sterling efforts of Ralph Hamers, CEO UBS and Tom Hall, Global Head Social Impact & Philanthropy.

McCaffrey shared, “We have philanthropists doing amazing work, but they’re all working in silos and if you look at the Christian charities, the Muslim charities and the Jewish charities, they’re all keen and interested in the same things – education, access to education, equality of opportunity, fighting human trafficking, poverty alleviation and reduction. All of these things are in common but everybody’s doing it in their own silos. I told the Pope this and I said imagine the power of collective impact. Bringing together philanthropists from all the different faiths which has never been done to my knowledge before. Certainly never been done here, under the auspices of the Holy Father’s message, and encouragement to work across faith lines for the first time because it’s better together. We all know that. The collective power is so much stronger. The Fund brings this philosophy into a pragmatic and tangible reality. That’s what we love about it and we’re so grateful to UBS as a partner.”

The Galileo Foundation also awarded its first ‘Prophets of Philanthropy’ Award jointly to Jeff Bezos and Chef Jose Andres who founded the World Central Kitchen which has provided over 200 million meals to those in need around the world and is currently working on the ground in Ukraine.

The Summit was addressed by Cardinal Pietro Parolin, the Pope’s Secretary of State, and by Cardinal Peter Turkson, chancellor of the Pontifical Academy of Sciences. Jeff Bezos, Founder and Executive Chairman of Amazon, was in attendance at the Summit and gave the keynote address. He thanked the church for the gift of education and shelter that it gave his father as a young immigrant from Cuba aged 16. Bezos then spoke about the importance of protecting the Earth’s fragile ecosystem. “The pressure that we are placing on our natural world can no longer be ignored. The Earth is a fragile thing. I saw this first hand last year, when I had the privilege to see our home for the first time. I had been warned that the experience would change the lens through which I viewed the world, but I was not prepared for how true that would be. It was the most beautiful sight I had ever seen. That moment only deepened my faith that we must do everything we can to protect this place and preserve its beauty.”

According to John McCaffrey next to Jeff Bezos, it was truly Cyrill Gutsch, founder of Parley for the Oceans, who was driving the conversation about the environment at the summit. “Cyrill is the leading environmental visionary in my eyes. He wants to solve the crisis by creating a new economy. One that is based on a true collaboration between us humans and nature, using biology instead of toxic materials. The Holy Father, Pope Francis was very impressed to receive from him a pair of sneakers and white sunglasses made with upcycled marine plastic debris.”

Finally, McCaffrey shared that climate change will be a big focus moving forward. “First of all, it’s huge for Pope Francis of course. He wrote a very famous encyclical Laudato si’ on the topic. So it’s very close to his heart. Certainly we’re thinking next year that the environment will be a major focus theme of the summit, wherever we have it, however we do it. This year’s it’s a bit broader, because we did want to say, ‘if faith can move mountains, how do philanthropists work together to alleviate poverty, free the oppressed and give opportunity to everybody’. So it’s quite a broad brush stroke but I think so many philanthropists love to support environmental causes. So for us it’s a no-brainer that we should look at that as a focus theme for next year.”

Order in Chaos, Foresight in Design

Order in Chaos, Foresight in Design

US Shoppers Will Spend One In Four Dollars Online