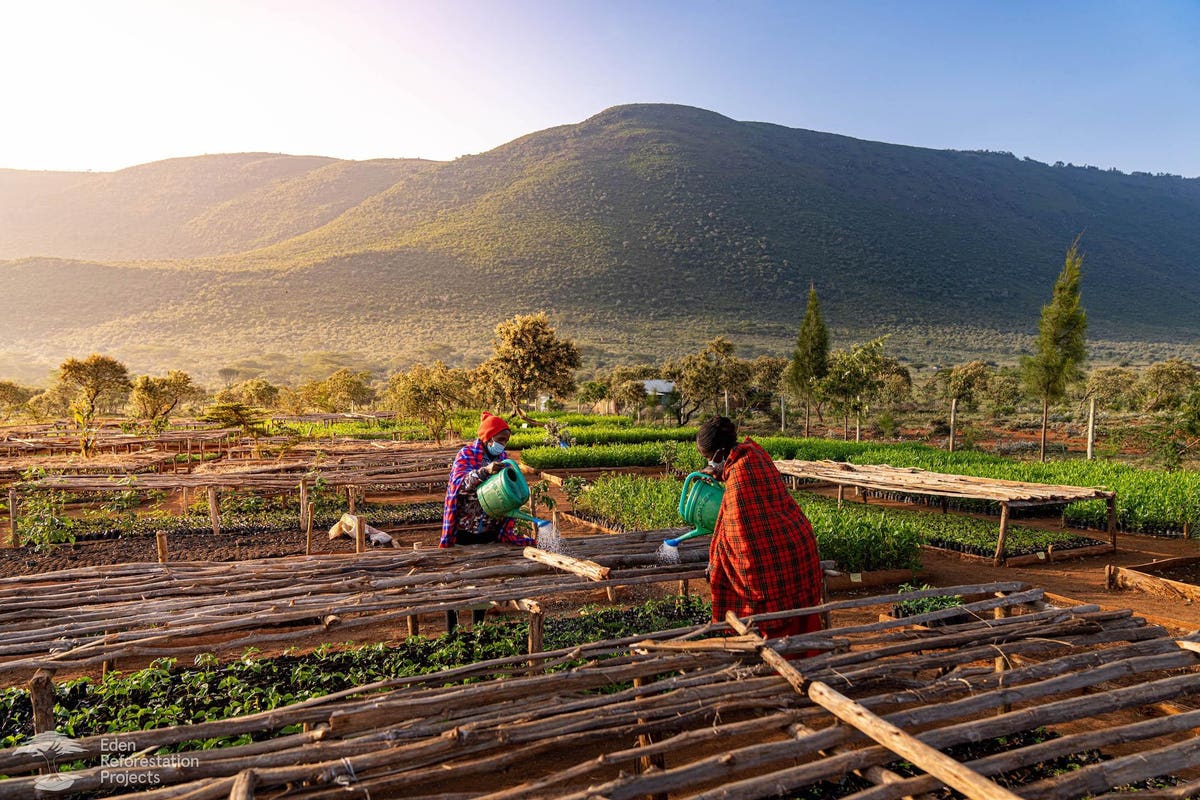 As the world tackles climate change, one of the most tried and true technologies is planting trees. While goals like planting a trillion trees seem incredibly ambitious, one non profit has already planted and restored nearly one billion trees – a milestone worth celebrating.

Eden Reforestation Projects (Eden) is a nonprofit organization that works in developing countries to rebuild natural landscapes destroyed by deforestation, engaging directly with communities experiencing extreme poverty resulting from the deforestation and destruction of the land that sustains them. The organization employs 14,800 of local community members and provides them with the education and tools necessary to plant, grow, and protect to maturity, millions of trees each year.

I caught up with Dr. Stephen Fitch, Founder & CEO, to learn more about the organization’s origin and the Employ to Plant methodology that hires people living in extreme poverty to produce, plant and protect tens of millions of trees every month and as such helping them create new opportunities for economic self-sufficiency, improved health, and education. Up to this day Eden has produced, planted and protected nearly a billion trees.

Eden started in 2004 when President Hailemariam Desalegn of Ethiopia’s Southern Peoples Region asked Dr. Stephen Fitch to take over an abandoned forest restoration project along the Udo Escarpment. Torrential rainfall in this deforested area had led to devastating flooding that killed eleven Udo villagers. The area needed restoration of its forest to stem future floods as well as to restore the local ecosystem to enable the villagers to provide for their basic needs. Despite having had no training in nursery or forest restoration sciences and no idea where funding would come from, he knew how to listen to people and help them envision their future.

It was through that process that led to developing the “Employ to Plant” methodology, which has become the core of Eden’s business model and philosophy. “Employ to Plant means simply to provide community members with long-term and fair wage jobs to transform their local environment. The dignity of employment, the injection of resources, the healing effect of restoration on farmland and fisheries, and the reduced risk of drought and flooding combine to provide opportunity for people. They can have sufficient food, the resources to educate and care for their families, and the ability to save money and, for some, start their own microenterprises,” Dr. Fitch explained.

Now, instead of being driven to destroy the local environment in a short-term struggle to survive, they can help build a more healthy, diverse local ecosystem and preserve it for the future. Applying that model in Ethiopia, they recruited a local team and began to repair the abandoned seedling nursery.

I asked Dr. Fitch what the companies should know about the true cost of planting trees and what to look for in terms of partners to avoid greenwashing. Dr. Fitch clarified Eden’s approach. “The organization benefits greatly from its scope and scale, which enables it to spread infrastructure costs across a broad base and to learn from its experiences in different countries and planting regions. It also benefits from doing a lot of mangrove restoration projects, as those tend to be very efficient and scalable for many reasons, including that it is possible to skip the nursery phase by planting propagules directly,” he said. Eden’s employees work very hard to keep their processes simple and repeatable. And most of the countries Eden works in have quite low labor costs, which matters because labor makes up about half their cost per stem.

In comparison with other organizations which sometimes charge a dollar per tree, Eden recently increased its price per tree to just 15 cents per tree in most countries for a few reasons. It was its first price increase since the Eden started, so the cumulative effects of inflation had started to catch up. He explained, “The old prices did not include funds for building capacity and infrastructure, which has become very important as it has scaled exponentially. And Eden is now setting aside more funds for monitoring, evaluation and long-term protection, including through a forest guard endowment fund, aimed at promoting a sustainable process.”

In order for companies to avoid greenwashing in terms of partners, most simply, companies should look for providers that can demonstrate to them: 1) they planted the trees they were contracted to plant; 2) the trees were appropriate for the area; and 3) they were allocated only once.

Perhaps more importantly, companies should look to providers that don’t just put stems in the ground but have a coherent plan to restore the area in which they are working, using a combination of methods, not limited to planting stems. Eden sees trees planted and other restoration inputs as components of an output in the form of hectares of restored ecosystem function.

“We believe strongly that there are direct links between healthy environments and addressing the Sustainable Development Goals, including poverty alleviation, and that our work directly contributes to that. We try to be very careful in talking about the carbon impact of our work because it is very complicated to measure, extremely site-specific and species-specific, and doesn’t occur right when you plant, but in the future, Dr. Fitch added.

The IPCC and other organizations have guidelines that can be used to provide global estimates, but Eden really tries not to get ahead of itself, nor to provide false precision or to present “something that may happen in the future” as “something that has already happened.”

We further discussed how to avoid ‘imperializing’ with the communities Eden collaborates with on planting trees and how it benefits them. Eden thinks of “imperializing” as occurring when outsiders come into a community and extract resources or impose their will on a community through power or influence. Eden’s approach is very different. It starts its projects by consulting and partnering with local communities.

It begins the process by recognizing the importance of local knowledge and it then works with the communities to incorporate this into joint restoration efforts. “Just as we seek, on the restoration side, to “prime the pump” for nature so that nature’s own processes can kick in and greatly supplement our initial work, so too do we hope to prime the pump on the socioeconomic side by bringing in resources through the Employ to Plant model, so the community can build a sustainably healthy long-term future,” Dr. Fitch explained.

I asked him how fast it can get to a scale which makes a dent in carbon emissions and starts to offset the damage caused. “The reality is going to take hundreds of groups with Eden’s capacity to accomplish what needs to be done. Although time is of utmost relevance in this process due to the urgency of mitigating climate change, it is even more critical for everyone to do it right,” he said.

In this sense Eden is putting systems in place to allow its processes to promote long-term sustainability for the people in the areas in which it works, which will result in reduced pressures on the ecosystems themselves. Eden is actively looking for opportunities to partner with other organizations and to share with them its Employ to Plant model and the lessons learned from 17 years of work in the field to help them scale alongside it.

Finally we discussed some of the biggest corporate partners and what kinds of companies Eden would like to work with. Eden has more than 1,200 corporate partners and thousands of additional individual donors. “We list a number of our partners on our website, but I don’t like to call out just a few of them because we value and appreciate them all. As we say, it takes a village to raise a forest. Ultimately, global unity and active commitment are the essential elements required to reach the ambitious goals being talked about these days. We invite those companies and individuals that share our commitment to a sustainable future to join us and others in this space, “ Dr. Fitch concluded.

How To Be a Good Interviewer

The Power of Audio | GreenBook