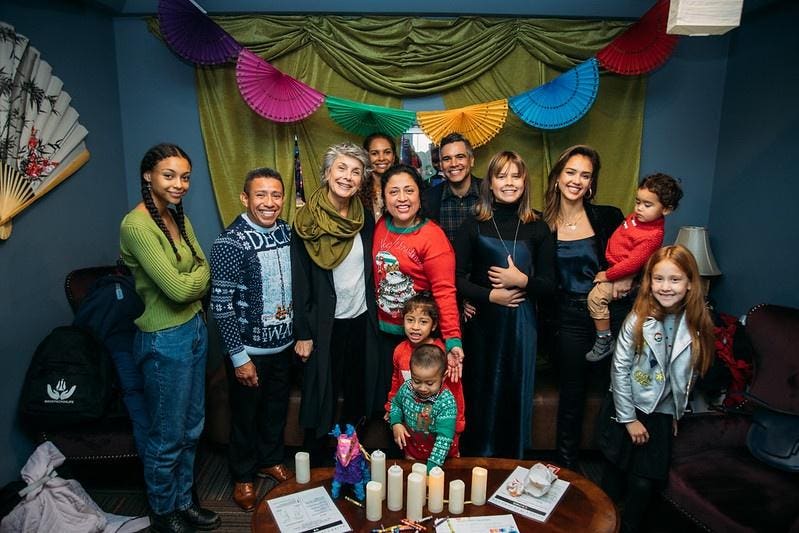 Poverty, like wealth, is passed down from generation to generation. And decades of racial inequity and underinvestment in our communities have kept families trapped in a cycle.

LIFT is an inspiring non-profit whose mission is to break that cycle by investing in parents. They build families’ well-being, financial strength, and social connections to lift two generations at once.

In a report published earlier this month in Nature, researchers demonstrated how cross-class friendships can increase economic mobility – and provided statistical confirmation of what LIFT has known for a long time.

Michelle Rhone-Collins is the CEO of LIFT. With over 25 years working in the youth and community development fields, Rhone-Collins has continually taken a stand to promote equity and access for disenfranchised individuals and communities. Cash Warren is on the board of LIFT Los Angeles and the cofounder of Pair of Thieves.

I caught up with them to dive deeper into this game-changing approach to tackling poverty.

“We’ve proven this connection by tracking growth in our members’ social capital and comparing it to their progress against economic outcomes and found that this positive effect is ultimately about more than just higher earning potential – it’s about how our social relationships change the way we feel about ourselves (hope) and create access to opportunity through a network of supportive connections (love),” said Rhone-Collins.

Warren added, “Despite pull-yourself-up-by-your-own-boot-strap world views, we are human beings that rely on each other to get ahead. Yet, we know that like financial capital, social capital (including that afforded by social media) is unevenly distributed. The communities we serve – as vibrant, tightknit, and generous as they are, don’t have the same access to the financial resources they need to solve problems.”

Compounding this is the fact that we’ve thrown out common sense and humanity in designing our social services system. The safety net provided for poor families is severely frayed with a fundamental lack of trust in interwoven into policies that are supposed to support, serve, and protect.

LIFT shared the story of one such family: Carolina and Juan[1], who found themselves in a desperate situation where living out of their car became the best and only option. Then Juan lost his job, and Carolina discovered she was pregnant. LIFT mined their resources to get them employment, prenatal care, even housing. But that was not enough—they needed a security deposit which they did not have and there was no way to get within the current constructs of our traditional social services system. Instead of giving up, LIFT leaned in and hacked the system by putting out a virtual SOS out to their own relationships to fully fund that deposit. When one month later, their car— their lifeline to economic stability– was totaled, LIFT reached again to crowdsource $700 towards replacing the car. Fourty-eight hours later, the problem was solved.

Then this vibrant community that formed around Carolina and Juan, threw them a baby shower- this time out of love and care for a couple they were now connected to rather than in response to a call to action by LIFT. Instead of being born into homelessness, baby Bianca was born into a loving home and a community of people looking out for her.

Rhone-Collins expanded on this direct-action thesis. “Tired of telling our members NO because of structures beyond our control, LIFT started to give cash to parents in its programs by putting them in direct relationship with those with access to funds and different opportunity. Resources that could quickly resolve crises ($500 to pay for a certificate needed for a job; $1,000 to pay for summer childcare to keep a recently secured job and home) were actually readily available from donors and stakeholders. This investment was the open invitation to a transformational relationship for all parties.”

Warren reflected, “This is beyond charity. Our family’s own investment in another family’s success has allowed us to develop a meaningful relationship that has been of great value to our family and has enriched all our lives. If we know that by connecting people from different walks of life enriches both lives immeasurably form new definitions of community, not just ones confined within our own neighborhoods, we need to figure out ways to do this at scale, especially in a world where we operate in increasingly self-segregating circles.”

For baby Bianca, loving relationships, germinated through the exchange of cash, grew into a web of support that ensured that from Day One, she is going to get a fair shot. In closing, Rhone-Collins shared this provocative call to arms. “We need to think about how we can get to YES for people like Carolina and Juan, and the 50 million Americans like them teetering on the edge. Channeling Robert D. Putnam, ‘how can we make their kids, our kids by loving and investing in them with the same dedication as our own’? What if, as a society, we challenged ourselves – especially those with privilege, to build bridges to trusting relationship rather than walls?”.

To find out more about LIFTS work, click here.